RadioFrequency Is a Safe, Effective In-Office Procedure That Reduces Nasal Congestion And Swelling From Allergies

Do you suffer from allergies? Are you finding it hard to breathe through the nose? Are medications to improve airflow not working? It’s possible that you have nasal swell bodies.

The nasal swell body is a fusiform structure (spindly in shape where its widest part is in the middle and narrowest ends are at the head and tail) located in the wider area of the nasal septum which is located above, or superior, to the inferior turbinates and toward the front (anterior) of the middle turbinates. It is considered to be physiologically similar to the inferior turbinate. A nasal swell body is made up of cartilage, bone, and mucus lining that can be seen during an endoscopic exam or radiographic session. NSB’s can also be confused with a deviated septum and are common in patients who have chronic sinusitis symptoms.

A nasal swell body plays a role in nasal airflow and humidification. NSB’s can affect airflow through both the external and internal nasal valves, and its size seems dependent on gravity, meaning that a patient’s head position can actually affect/determine its size.

A nasal swell body, also comonly known as a septal swell body or septal lesion, has been given many other names since it was first described in 1951 German literature: septal body, septal turbinate, septal cavernous body, septal tumescence, and Kiesselbach’s ridge. Nasla swell bodies have been shown to: 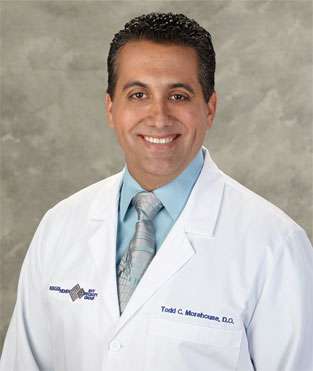 As is the treatment for allergic rhinitis, typical treatment for nasal swell bodies can includes topical nasal sprays, pills, antihistamines, and intranasal steroids. However, there are patients that find these treatments to be ineffective.

Historically, a nasal swell body reduction has not been common. However, Dr. Todd Morehouse (pictured), always on the cutting edge of effective rhinologic advancements, has initiated a very safe, effective, in-office treatment for patients suffering with nasal obstructions due to allergies who are unaffected by steroid sprays and antihistamines. It’s a treatment procedure that has proven quite successful called RadioFrequency Reduction that effectively reduces the size of nasal swell bodies to allow patients to breathe easier again.

RadioFrequency is a very safe, effective in-office procedure that reduces nasal swelling and congestion and gets you back to work the same day.

During the in-office RadioFrequency Reduction procedure, the swell body in the patient’s nose is anaesthetized. Because nasal swell bodies are not very sensitive, patients feel very little discomfort when anaesthetized. After about 20 seconds, a RadioFrequency wand is introduced into the swell body’s submucosa in the nasal cavity (parallel to the nasal septum) for about 2 seconds per pass. Dr. Morehouse usually averages about 3 parallel passes along the swollen area, moving the wand from inferior to superior.

Once the procedure is complete, saline irrigation is recommended once daily for 2 weeks, beginning the day of the procedure.

The best part of the nasal swell body reduction is that no medications are required after the in-office procedure and patients can return to work the same day. Patient follow-up is recommended 2-3 months after the procedure.