Dr. Donald Sesso is one of only 6 surgeons in the US with triple board certification in Otolaryngology, Sleep Apnea Surgery and Sleep Medicine.

Snoring and Sleep Apnea Audio Introduction
Do you or your partner snore? Are you constantly tired? Is your energy level low? You may have sleep apnea! Click to hear more. 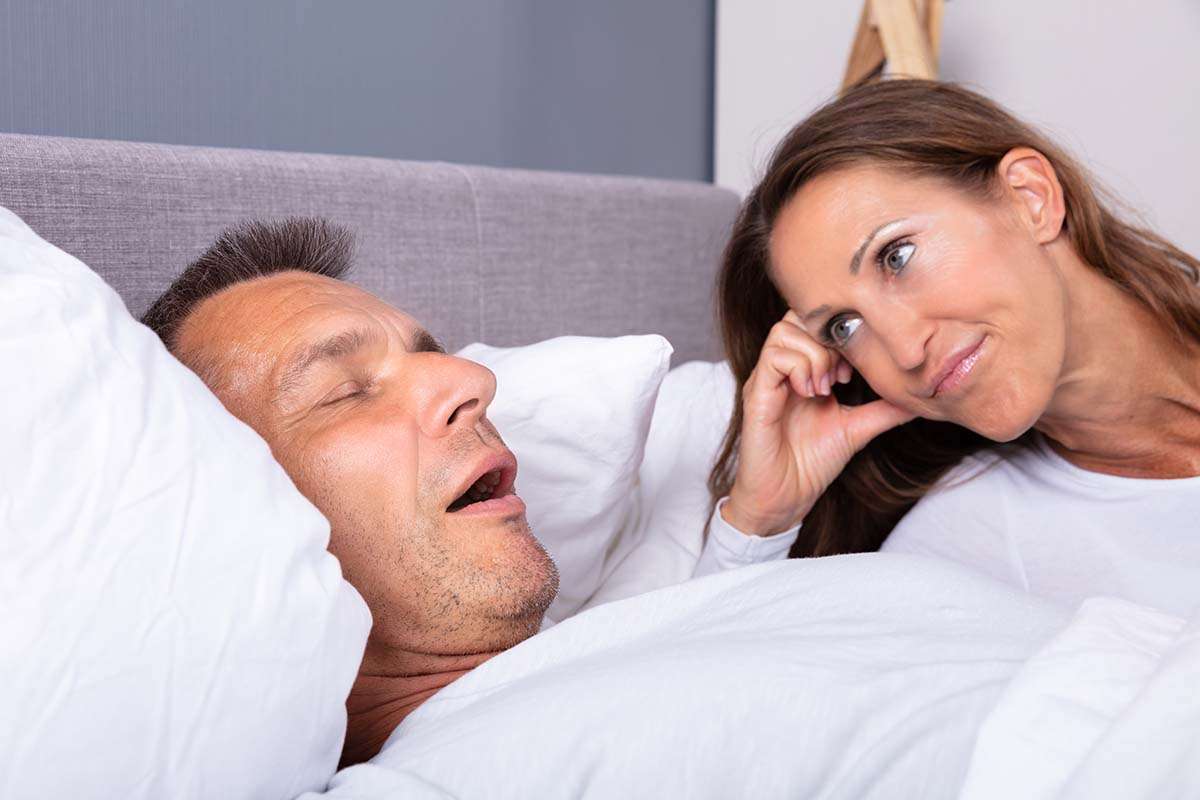 At BergerHenry ENT, we have one of the foremost experts in the field of sleep apnea. Dr. Donald Sesso, known as Philadelphia’s Snoring Doctor, is one of only 6 surgeons in the country to hold triple board certification in Otolaryngology, Sleep Apnea Surgery and Sleep Medicine. His extensive training at Stanford University Medical Center and years of experience have given him the expertise to offer every available treatment option for snoring and sleep apnea problems. Dr. Sesso is a strong believer that one surgical or medical solution does not fit everyone. Each snoring and sleep apnea treatment plan must be tailored by the snoring doctor to the patient based on specific physical exam findings, body mass index and sleep study test results. Dr. Sesso has the best understanding of these complex sleep disorders, extraordinary treatment experience with thousands of patients, and knows how to communicate a complicated problem in an easy-to-understand manner.

Snoring. What Is It Exactly?

Snoring is simply an obstruction to the free flow of air through the back of your mouth and nose. This area is the collapsible part of the airway where your tongue and upper throat meet the soft palate and uvula. When these structures strike each other and vibrate, snoring is the result.

What Causes Someone to Snore? 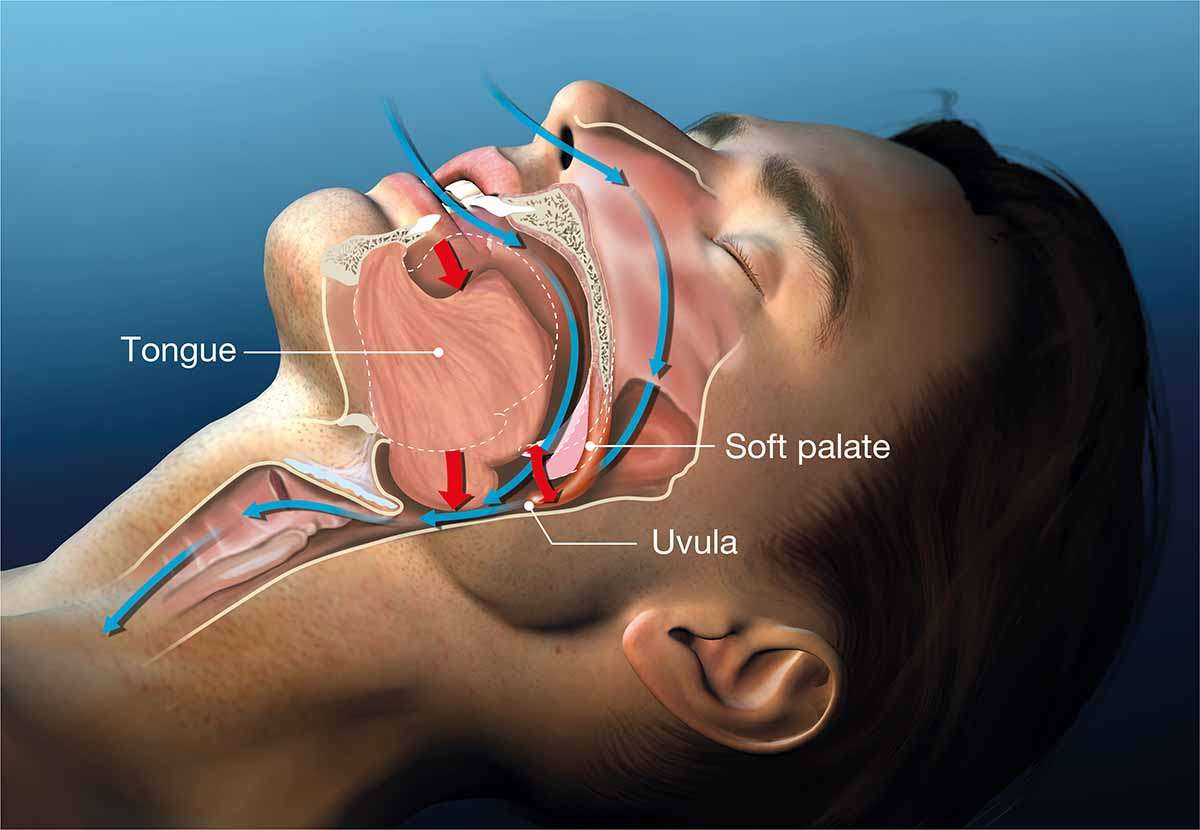 Yes, when snoring is severe it can be serious. Snoring disturbs your sleeping patterns and deprives you of appropriate rest. Your snoring may be a significant problem for someone else, as well. When left untreated, snoring can cause long-term health problems, including sleep apnea. Don’t leave your snoring untreated. Call to schedule an appointment with your snoring doctor.

What Is Sleep Apnea?

The word “apnea” literally means “without breath.” There are three types of apnea. Obstructive sleep apnea is the most common. It is caused by a blockage of the airway, usually when the soft tissue in the rear of the throat collapses and closes during sleep. Central sleep apnea is caused by a blockage in the airway. However, in central sleep apnea, the brain fails to signal the muscles to breathe. Mixed sleep apnea, as you can imagine, is a combination of obstructive and central sleep apnea. With each apnea event, the brain briefly arouses people so that they resume breathing, but consequently sleep is extremely fragmented and of poor quality.

Sleep apnea can cause high blood pressure and other cardiovascular disease, weight gain, memory problems, impotency and headaches. Untreated sleep apnea may also cause job impairment and vehicle accidents. Fortunately, sleep apnea can be diagnosed and treated. Both medical and surgical options are available. Like snoring, please don’t leave your sleep apnea untreated. Call to schedule an appointment with your sleep apnea specialist.

What Is Obstructive Sleep Apnea (OSA)?

Obstructive sleep apnea (OSA) occurs when the airway completely or partially collapses repeatedly during sleep. When the airway is blocked, the oxygen levels in the body drop causing the person to wake up long enough to begin breathing normally again. These awakenings, also referred to as arousals, are often very brief. In fact, they may only last a few seconds, and the majority of affected patients are often not aware that these awakenings occur during sleep. This pattern repeats during the night, and someone with severe sleep apnea may wake up hundreds of times each night. Even though the awakenings are usually very short, they fragment and interrupt the sleep cycle. This sleep fragmentation can cause significant levels of daytime fatigue and sleepiness, which is a common symptom of sleep apnea. SO, even if a patient with OSA sleeps for the appropriate length of time, they still have a poor quality of sleep.

OSA Affects Both Men and Women

Would you believe that about 1 BILLION people in the world, between the ages of 30 and 69 years, have obstructive sleep apnea? That’s 1 in 7 people! In the US, OSA is estimated to occur in 24 million people (14.5% of the population). Variables that increase OSA risk are age, male sex, obesity, family history, menopause, craniofacial abnormalities, and health behaviors such as cigarette smoking and alcohol consumption. Unfortunately, about 80% of OSA patients do not seeke treatment. OSA is a treatable condition; however, if left untreated, it is associated with serious medical conditions. OSA has been linked to cardiovascular diseases, specially high blood pressure, cardiac arrhythmias, heart attack and stroke. Snoring and sleep apnea are also associated with a higher risk of accidents, impaired work performance and strained interpersonal relationships.

A typical OSA patient is a middle age, over-weight male; however anyone can develop OSA. In fact, women and children remain significantly undiagnosed due to the bias that only overweight men can have OSA. Symptoms can vary from person-to-person, and do not always correlate with the severity of OSA.

While snoring in adults does not always indicate the presence of OSA, snoring or noisy breathing is abnormal in children. OSA is often overlooked in kids because the symptoms of OSA can be different in children than they are in adults. Not all children with OSA snore, and when they are tired they rarely nap, instead they become hyperactive (and may mimic those children with attention deficit-hyperactivity disorder) or develop behavioral problems. These behavioral problems may manifest themselves as irritability, lack of concentration, easy distractibility, and hyperactivity which can lead to problems at school. Some children with OSA are improperly diagnosed with attention deficit-hyperactivity disorder (ADHD). Additionally, many children with OSA are not overweight. Common symptoms of sleep apnea in children may include:

How Is Sleep Apnea Diagnosed? 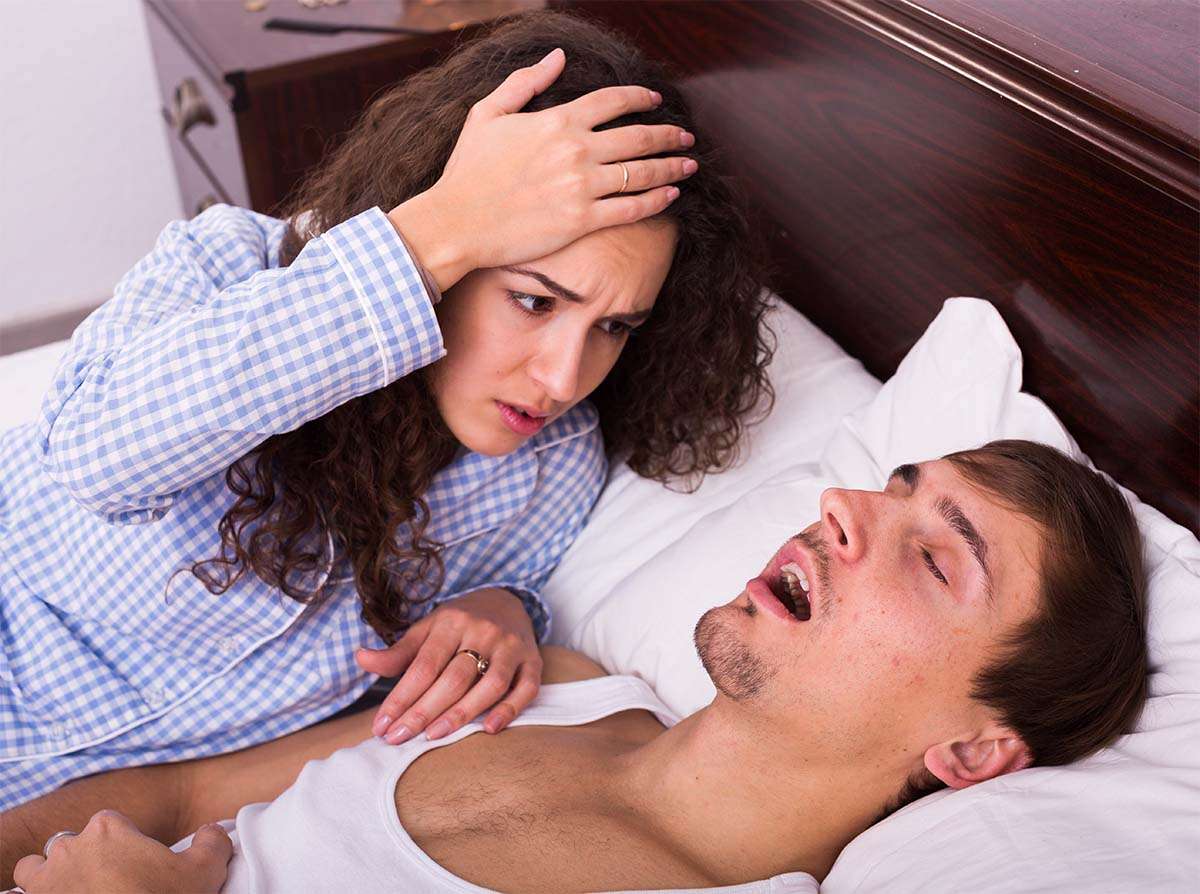 Sleep apnea can be diagnosed with an in-office consultation with your ENT doctor or with a sleep study.

1. In-office consultation with your ENT doctor
Unfortunately, many patients are given a diagnosis of sleep apnea without ever having their airway examined. Oftentimes, structural abnormalities such as deviated septum, nasal polyps, enlarged tonsils, airway tumors, vocal fold disorders, or GERD go unrecognized and untreated. At our Snoring and Sleep Apnea Center, our snoring doctors consider an airway examination a critical part of the diagnosis and treatment of sleep apnea.

When you arrive for your consultation, give your snoring doctor as much information as possible including a record or journal of your sleep habits, i.e., do you snore?, do you notice pauses in your breathing?, do you choke or gasp during the night?, how often?

If you don’t know, then perhaps your bed partner can assist. In addition, let your ENT doctor know if you’re unusually tired throughout a typical day, if you experience morning headaches, night sweats, sexual dysfunction, inattentiveness, problems remembering things you should remember, anxiety, depression, or irritability.

Bring your snoring and sleep apnea doctor a list of all medications that you’re taking to your appointment – both prescribed and OTC. And don’t forget to call your medical insurance provider and ask if you need a referral for your visit.

2. Sleep study
A sleep study is the most common method of diagnosing sleep apnea (and its severity) and can be performed in your home or overnight at a sleep center. Frequently, patients choose home sleep studies as this test is more affordable and convenient. 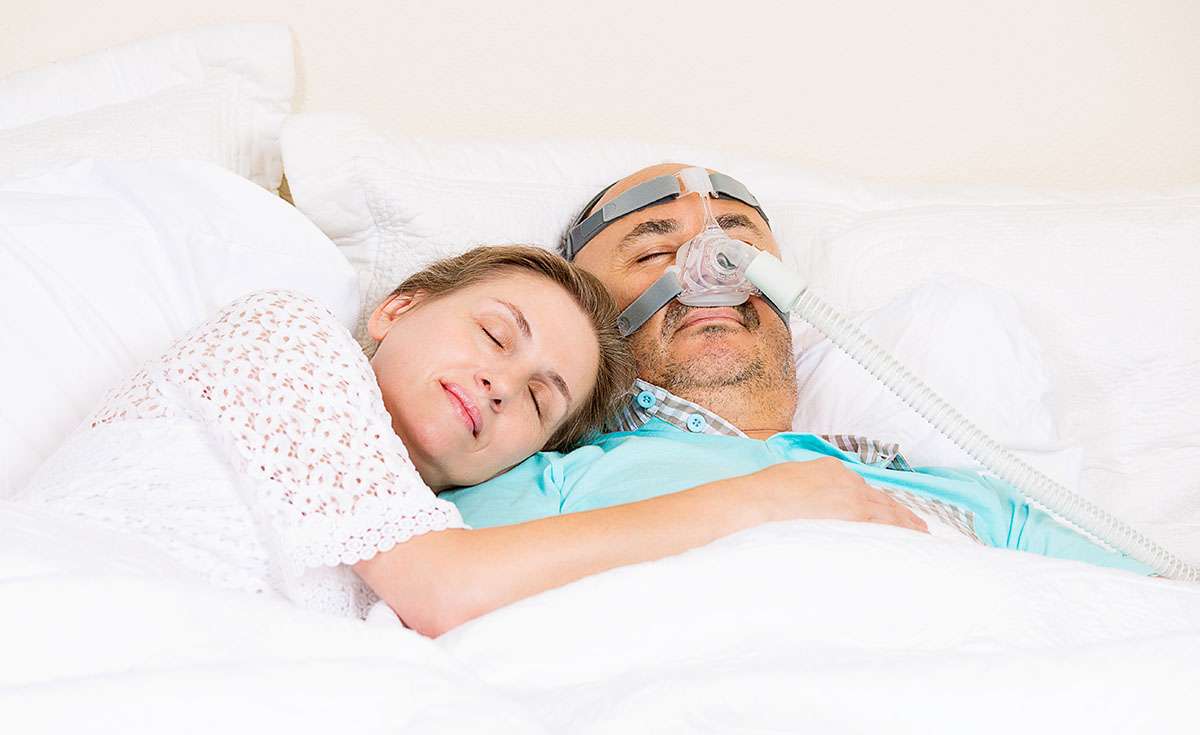 CPAP machine
There are a number of ways to treat sleep apnea. The continuous positive airway pressure device, or CPAP, is the most well-known and highly-effective method for treating sleep apnea. It is typically the first line of treatment. It contains a nasal or full-face mask, a long hose, and a powered motor. A humidifier that adds moisture to the air intake is optional. If you suffer from obstructive sleep apnea, or OSA, your throat muscles and tongue collapse into your airway which disrupts breathing. The CPAP blows pressurized air through your airway preventing it from collapsing as you breathe throughout the night.

By using the CPAP machine, you should notice no or fewer breath-stopping episodes, less snoring, less fatigue during the day, less anxiety, and lowered blood pressure. You will also lower your risk of heart disease.

The CPAP has come a long way since it was first invented in 1980 by Professor Colin Sullivan at the sleep clinic of the Royal Prince Alfred Hospital in Sydney, Australia. The first CPAP model was big, bulky, and noisy – just like the first computers. And like today’s computers, modern CPAPs are much smaller and more efficient. They leverage computer chip technology, weigh less than one pound, and fit in your hand. Due to integrated battery systems, they are also portable. They are built with proprietary breathing algorithms which can deliver more effective, lower rates of pressure, and are equipped with Bluetooth™ technology to sync with your smartphone thus allowing data to be shared with your doctor.

Dental Appliances
A custom-fit oral appliance that looks and fits like a retainer or sports mouthguard can also be used to mitigate sleep apnea. It pushes the lower jaw forward which helps to keep your airway open. If your snoring and sleep apnea doctor recommends an oral appliance, a prescription will be written for you to take to your dentist who will mold one for you. Oral appliances for sleep apnea are covered by a host of medical insurance providers.

The benefits of an oral appliance to treat sleep apnea include comfort, convenience, ease of wear and maintenance, and portability.

Upper Airway Surgery
Some patients find it difficult to adhere to the CPAP regimen which prompts them to seek alternate sleep apnea treatments. Upper airway surgery is one such treatment which removes tissue in the airway.

Nasal Expiratory Positive Airway Pressure (EPAP)
With a disposable valve covering the nostrils, the EPAP forces positive pressure only when you are exhaling. Consult with your sleep apnea doctors and ask if they believe that your airway is collapsing only when you are breathing out.

Hypoglossal Nerve Stimulation
A stimulation device, similar to a pacemaker, is implanted in the chest and will stimulate the hypoglossal nerve (which controls tongue movement) to open your airway. It monitors your breathing and is only activated while you sleep.

If you would like to know more about snoring and sleep apnea, we invite you to call us at (610) 279-7878, book an appointment online, or visit The Pennsylvania Snoring & Sleep Institute.