Learn about the symptoms of and treatments for enlarged turbinates.

Inside our noses on the side walls, we have radiators, referred to as turbinates, that humidify, heat, and filter the air as it flows into our noses.

Why do we need these radiators, or turbinates? Because the air flowing through our nostrils needs to be cleaned, warmed to the right temperature, and moistened before it reaches our lungs. As you can see, the turbinates play an important role in the health of our bodies.

There are 4 types of turbinates in your nose: 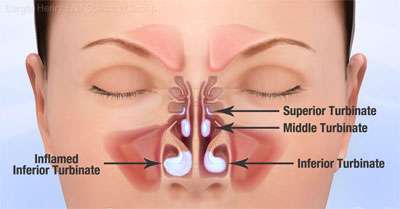 Functionally, the most important turbinates are the inferior, or lower, turbinates. They are bilaterally located on either side of the nasal septum and they are made of spongy and curly bones. Mucous membranes (epithelia) cover them and provide initial immunological help to the lymphatic system. Inferior turbinates can become inflamed or even shrink when you have a sinus infection or allergies, or if there is an environmental temperature swing. All of us have some degree of turbinate dysfunction at some point in our lives.

When the inferior turbinates continually become inflamed and make it difficult to breathe, it is chronic and is referred to as turbinate hypertrophy.

Some symptoms of turbinate hypertrophy include breathing difficulty and snoring because the swelling of the turbinate closes off airflow to the nose. 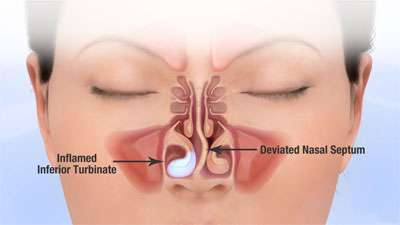 Turbinate hypertrophy is associated with nosebleeds, chronic sinus infections and chronic sinusitis, each of which can be caused by a deviated septum.

The nasal septum is a thin wall of bone and cartilage that separates your left and right nasal cavities. When it becomes crooked or displaced to one side of the nose, it is referred to as a deviated septum. As the nasal septum deviates to one side of the nose, it can reduce airflow, create more difficulty breathing, leave you susceptible to chronic sinus infections, chronic post nasal drip, headaches, and can cause snoring and sleep apnea, bad breath, and tooth decay.

When the nasal septum protrudes to one side, interestingly, the inferior turbinate that becomes inflamed is on the opposite side. That is, if the septum deviates right, it’s the inferior turbinate on the left that is swollen. So, it’s rather common for doctor’s to encounter patients with two blocked nasal passages where one nostril will have the deviated septum and the other nostril will have the enlarged turbinate.

Surgery and Treatments for Turbinate Hypertrophy

Schedule an Appointment
If you suffer from symptoms of turbinate hypertrophy – nasal congestion, difficulty breathing, chronic nosebleeds, chronic sinus infections – call (610) 279-7878 to schedule an appointment or click here to Request an Appointment.