Can e Cigs (eCigarettes) Cause Cancer? 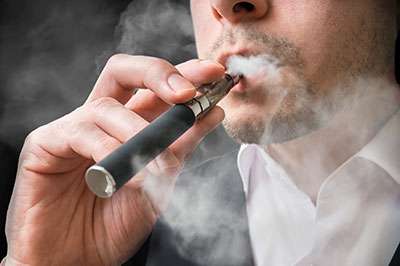 e-cigarettes and vaping have risen to popularity in recent years because many people thought they were safer than smoking traditional cigarettes. It turns out they are not.

In 2016, the Food and Drug Administration (FDA) extended the Family Smoking Prevention and Tobacco Control Act to cover e-cigarettes in order to control the sales and marketing of them. The American Lung Association1 has been sounding the alarm on e-cigarettes for some time now and reported a 900 percent increase in teenager’s use of e-cigarettes between 2011 and 2015. They are far from alone. There are numerous studies showing the high risks of e-cigarettes and vaping.

According to Dr. Marta Becker, Expert Laryngologist at BergerHenry ENT,
“We all know that cigarettes are bad for us. We know that they contain carcinogens that cause cancer and also damage our lungs, leading to problems like emphysema and bronchitis. We know less about the effect of vapes and e cigs, because they are newer and less research has been done. But we are starting to learn some disturbing facts about the chemicals in them and the short term and long term health effects. Parents need to understand the dangers and risks of vapes and e cigs so that they can help their kids avoid these products. They should also understand how to spot the signs if their children are using these products so they can hopefully intervene before addiction takes hold.”

A raft of studies showing the dangers
The health dangers of e-cigarettes are posed by the manner in which they work. They are battery operated and when activated, the battery heats up the nicotine and vaporizes the chemicals inside, creating an aerosol. The aerosol contains extremely fine particles of the chemicals and metals which are then inhaled into the lungs, creating a health hazard. Many studies have documented these risks.

Science News2 published a study on the health risks of e-cigarettes, reporting that “vaping pollutes lungs with toxic chemicals and may even make antibiotic-resistant bacteria harder to kill.” Stanton Glantz, director of the Center for Tobacco Control Research and Education at the University of California, San Francisco and his team studied the effect of e-cigarettes and what people are inhaling when vaping. They determined that the inhaled particles cause inflammations that have been linked to the incidence of “asthma, stroke, heart disease, and diabetes and really raise concerns about heart disease and other chronic conditions where inflammation is involved.”

A study published in the New England Journal of Medicine4 (NEJM) reported that e-cigarettes contain chemicals including propylene glycol, glycerol, or both, plus nicotine and flavorant chemicals. The study reported that in many samples of vaped e-cigarettes “more than 2% of the total solvent molecules have converted to formaldehyde-releasing agents, reaching concentrations higher than concentrations of nicotine.” The EPA has classified formaldehyde as a probable carcinogen linked to leukemia. In addition, vaping converts some of the chemicals into the same agents that are used as industrial biocides.

Scientific American6 reported on the unique dangers posed by e-cigarettes as they heat up chemicals that are inhaled into the lungs, including tin, chromium and nickel. When heated, the miniscule particles can travel into the far reaches of the lungs. Physicians and researchers worry that once the heavy metal particles embed themselves in those areas they may worsen existing asthma, emphysema and bronchitis

Poisonings are on the rise
When pediatrician Sophie J. Balk M.D. published a column in USA Today5 on e-cigarettes, she reported on two types of dangers posed by e-cigarettes:

Dr. Balk reported that the e-cigarettes are causing a rising number of calls to Poison Control centers as children are exposed to liquid nicotine. “Whereas in 2010 there was only one report per month (to poison control centers) of an adverse e-cigarette effect, there were 215 reports in February 2014. More than half of exposures occurred in young children.”

The health risks of e-cigarettes
Inhaling toxins and chemicals of any type poses numerous health risks, especially when they are fine particulates in aerosol form created by e-cigarettes. They can cause oral diseases7, inflammation, and DNA damage. They can cause damage to periodontal ligaments in the oral cavity which support the teeth, and cause bone loss and tooth loss.

The U.S. Surgeon General8 reports that the nicotine contained in e-cigarettes can cause “nicotine addiction, mood disorders, and permanent lowering of impulse control”.
There is also some evidence9 that e-cigarettes may increase heart rates and blood pressure.

In short, e-cigarettes and vaping are no healthier than traditional cigarettes. In fact, they may carry their own special risks. Not only do e-smokers and vapers risk permanent damage to their lungs, they may also worsen chronic diseases like asthma. Avoiding e-cigarettes, along with all other types of nicotine, is the best option for maintaining your health, your children’s health, and the air that we all have to breathe.