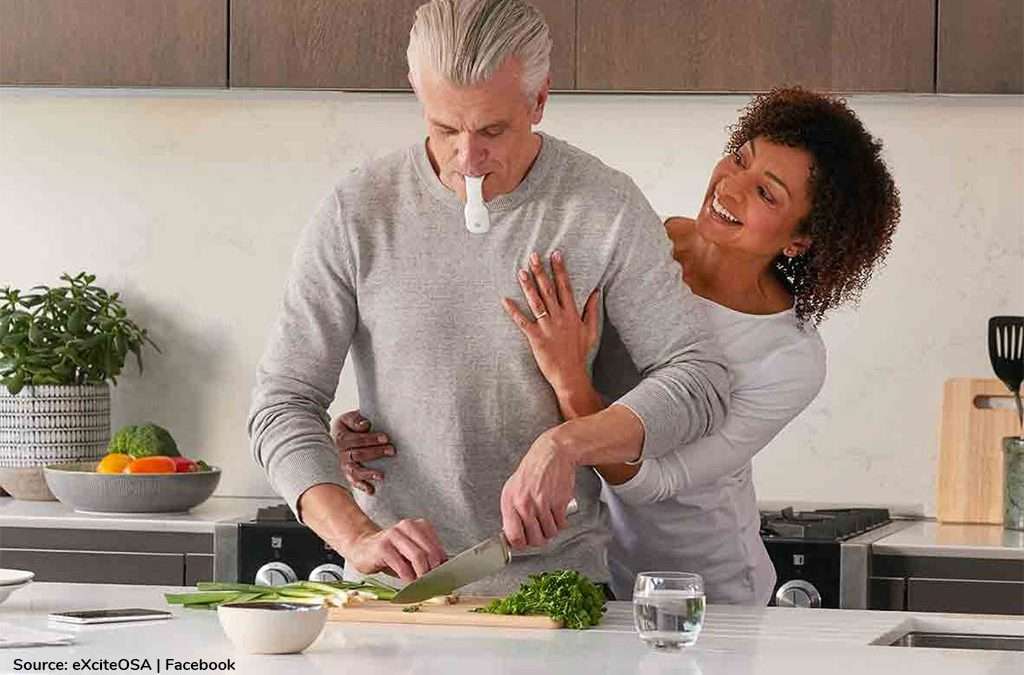 Earlier this year, a new treatment for obstructive sleep apnea (OSA) was approved by the US Food & Drug Administration (FDA). Notably, this new device is designed to be used during waking hours rather than overnight during sleep.

Around the world, almost 1 billion people are estimated to suffer from OSA with the US scoring second highest on the list of countries with the most affected individuals. Out of the estimated 22 million Americans who have OSA, around 80% of moderate to severe cases are thought to go undiagnosed. Not only is this an issue for your bedsharing partner who’s just trying to sleep in peace, but this is also an issue for you.

Obstructive sleep apnea is a sleeping disorder characterized by repeated pauses in breathing, known as apneas, as well as periods of shallow breathing, called hypopneas. It occurs when the tissues surrounding the upper airways collapse or become blocked, which inhibits your breathing. While loud snoring and an inconvenienced spouse are typical of someone with OSA, other symptoms include excessive daytime fatigue, awakening during the night from gasping or choking, a dry mouth, and various mental changes, such as difficulties in concentration or low mood.

OSA is also associated with:

What does this all equate to? Studies tell us that people with untreated severe sleep apnea are over 4 times more likely to experience an early death compared to those without sleep apnea. So, what can be done?

Mild cases of OSA may be addressed by some reasonably straightforward lifestyle changes to modify your risk factors. These include things like:

For more persistent or severe cases of OSA, many people will turn to a therapy known as continuous positive airway pressure (CPAP). The CPAP machine involves a mask worn over the lower part of the face and sets up a positive pressure environment to help keep your airways open overnight as you sleep.

An alternative to a CPAP machine is an oral device worn in the mouth overnight. There are a few variations of these mouthpieces. Some are designed to keep the tongue in a certain position while others adjust the position of your jaw.

And should all other therapies fail or be unsuitable for some other reason, there’s always surgery. Depending on the anatomy of your upper airways and the underlying cause of your airway obstruction, surgical options include the removal of specific tissues around your upper airways, implanting a device that stimulates the nerve controlling the tongue, and surgically adjusting the position of the jaw. There may also be cases where fixing a deviated nasal septum or removing your tonsils and adenoids may help to treat your snoring and OSA.

The New Kid on the Block

If the aforementioned options sound unappealing to you in one way or another, it’s not unexpected. CPAP therapy can be associated with discomfort from a dry mouth, bothersome noise, and an uncomfortable mask, all of which can end up being counterproductive in trying to get a good night’s sleep. Similarly, dental appliances for OSA can be uncomfortable and surgery, well, does anyone want to volunteer to put their upper airways under the knife?

If you have mild sleep apnea and are aged 18 years and older, you might just be in luck. A new device known as the eXciteOSA was approved just earlier this year. It’s a silicone mouthpiece that’s designed to be worn during the day for a session of 20 minutes. The device is comprised of four electrodes that deliver pulses of electrical stimulation to the tongue muscle. Over time, this results in stabilizing the tongue so that it no longer falls backward to block the throat during sleep.

The FDA has recommended the use of the eXciteOSA device as 20 minutes during waking hours daily for 6 weeks followed by once a week thereafter. However, it may not be a suitable option for you if you’re pregnant, have mouth ulcers or dental hardware, such as braces, and is also recommended to be avoided in people with pacemakers or implanted pacing leads.

Not surprisingly, a common side effect of the device is a tingling in the tongue. Other reported side effects include drooling, discomfort of the tongue or teeth, a metallic taste in the mouth, and gagging.

With the host of unwanted complications and risks that come from spending your nights snoring and not breathing, if you suspect you suffer from OSA, it would definitely be worthwhile seeking medical advice.