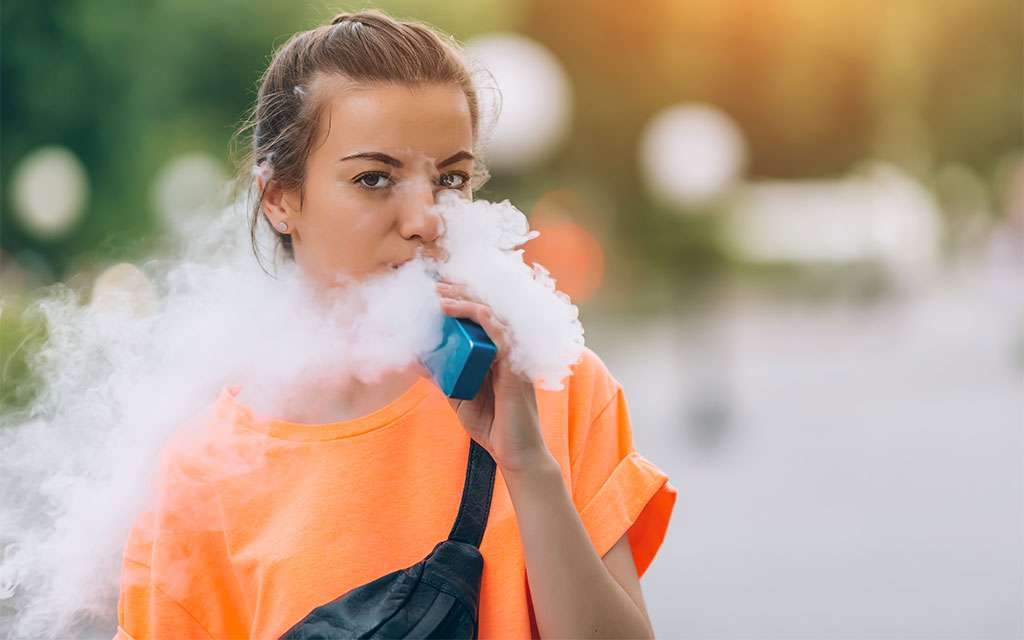 E-cigarettes, also known as vapes, vape pens, mods, or the more technical term, electronic nicotine delivery systems (ENDS), were first invented in 2003 by a Chinese pharmacist. Fast-forward 17 years to where 3.6 million American middle and high school students reported smoking e-cigarettes, also called vaping, in 2020. Although some claim vaping is harmless and a gentle way to quit traditional cigarette smoking, more recent research suggests otherwise and the US Food and Drug Administration (FDA) suggests that vaping is not safe.

A vape pen contains a liquid, known as vape juice or e-juice, which is vaporized and then inhaled. This liquid may be flavored or not, and may or may not contain nicotine. Concerningly, several brands of e-cigarettes claiming to be nicotine-free or containing only low levels of nicotine were found to have been less than truthful on their labels. While tobacco smoke is a known risk for various ENT (ear, nose, throat) problems, including hearing damage, tinnitus, bad breath, and chronic laryngitis, vaping has managed to construct a reputation for itself as a safe-yet-still-cool alternative. However, before you take a puff of that (allegedly) nicotine-free, forest fruits-flavored mist, consider that an analysis of various vape juices found that some may contain:

Looking over this list it should be no surprise that safe-but-still-cool vaping may not be so safe after all, and has the potential to result in various consequences for your ENT doctor to deal with.

There have been anecdotal reports of hearing loss linked to vaping although there is not yet enough robust evidence to determine if e-cigarette use was directly and solely responsible. However, various components of vape juice are known to be potentially damaging to hearing. A study out of Korea analyzing 73 different bottles of vape liquid reported that even in the absence of nicotine, the other compounds contained within their formulations still carried the potential to cause damage to the cells of the human middle ear. Interestingly, among the available flavors, menthol was found to be the most harmful.

The issues with nicotine are more widely known, one of the foremost being its addictive properties. Nicotine is also a vasoconstrictor, narrowing blood vessels throughout the body and subsequently restricting blood flow. Reduced blood flow throughout the ears results in decreased oxygen supply to the inner ear. This can lead to damage to the hair cells of the cochlea in the inner ear, which are vital for the process of hearing.

A particularly concerning observation is the high uptake of vaping amongst children and adolescents. As studies have shown that the nerve involved in hearing is not fully developed until the late teens, these neural pathways can be particularly susceptible to damage from nicotine. Although FDA regulations now prohibit the sale of e-cigarettes to children under 18 years old, online products are still too easily accessible.

Studies have found that vaping has the potential to alter gene expression in the nasal mucus membranes responsible for the immune response. While immune suppression is a known and expected finding of traditional cigarette smoking, it was observed that vaping e-cigarettes is associated with greater suppression of immune-related genes compared to traditional cigarettes. This dampened immune response in the nasal tissues results in the potential for increased microbial infections, including chronic sinus infections as bacteria colonize the nasal sinuses and spark inflammation. There is also suggestion that e-cigarette vapor exhaled through the nose can cause localized irritation and exacerbate existing conditions.

Several compounds found in vape liquid are known to irritate the throat, causing soreness and a cough, known descriptively as a vape cough. One such chemical is the aforementioned propylene glycol, which also acts to dehydrate the body and cause a sore throat. Other vape juice components, including volatile organic compounds or diacetyl, a chemical used in flavoring, are also known to cause throat irritation and soreness. In addition to effects on the throat, diacetyl has also been linked to lung disease.

When it comes to a position on vaping, many authoritative bodies such as the FDA, CDC, and American Academy of Otolaryngology are primarily concerned with the effects on youth, particularly due to the potential for nicotine addiction. Although the jury is still out on the exact extent of health risks from this purportedly safe-but-still-cool alternative to smoking, if you decide to take up vaping it may help to keep your local ENT doctor’s phone number on hand.