Do You Suffer from Chronic Sinusitis? You May Have Nasal Polyps 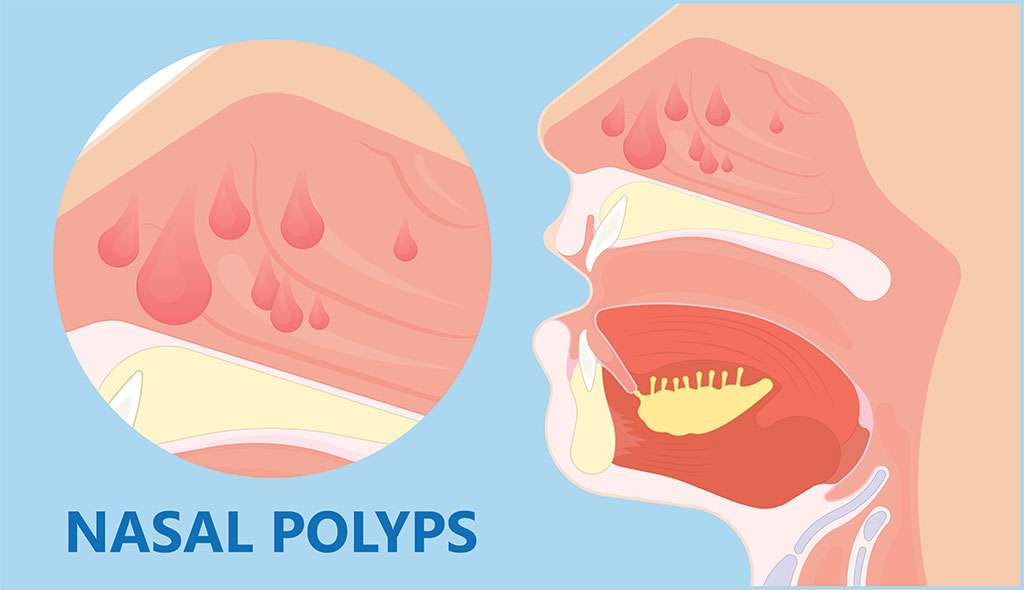 Sounds like some sort of sea creature, doesn’t it? Nasal polyps are often described as a bunch of grapes or hanging teardrops within the nasal passages or sinuses. Though they are considered benign, non life-threatening, and if small and few, may not cause any symptoms. But, you can imagine that having a whole bunch of grapes clogging up your nostril has the potential to cause some issues.

Nasal polyps grow from the mucosal lining of the nasal passages and sinuses, with a preference for the outflow sites where the facial sinuses drain into the nasal passages. The prevalence of nasal polyps is estimated at around 4% of the population; they are more commonly found in men than women as well as in adults over the age of 20 years.

Nasal polyps do not contain sensory nerve endings and so you don’t feel any pain. However, the presence of these dangling nose-teardrops can result in several annoying symptoms:

Secondary symptoms can also include headache or facial pain/pressure, poor quality sleep due to breathing difficulties, and generally lowered quality of life.

Nobody really knows why some people’s noses suddenly decide to grow a bunch of grapes inside. We do know there appears to be a contribution from the body’s immune system, often in response to chronic inflammation of the nose and nasal sinuses; however, there are many patients with chronic sinusitis (inflammation of the sinuses) who don’t develop polyps and conversely, patients with no sinus issues whatsoever other than the fact that they do have nasal polyps.

Certain medical conditions have been found to be associated with the presence of nasal polyps and are considered risk factors for their development, and genetics are also thought to play a role.

Curiously, aspirin sensitivity has also been linked with the presence of nasal polyps in a syndrome known as aspirin-exacerbated respiratory disease (AERD) or Samter’s Triad. AERD is characterized by sensitivity to aspirin or other non-steroidal anti-inflammatory drugs (NSAIDs), asthma, and chronic sinusitis with nasal polyps. Studies have found this condition typically begins as chronic sinusitis, followed by the development of bronchial asthma, then aspirin sensitivity and the presence of nasal polyps. AERD comprises around 10% of cases of nasal polyps and is also associated with an increased likelihood of the polyps recurring after treatment.

Allergic rhinitis, also known as hay fever, is another condition associated with nasal polyps. Unsurprisingly to anyone who suffers from hay fever, particularly of the chronic variety, allergic rhinitis can involve significant amounts of inflammation of the nasal passageways, perfect conditions for growing nose-grapes. Specifically, some cases of nasal polyps are associated with an allergic reaction to airborne fungi in a condition known as allergic fungal sinusitis.

Cystic fibrosis is important to rule out in children who present with nasal polyps as the presence of polyps in this age group due to the other factors listed above becomes less likely. Cystic fibrosis is a genetic disease affecting the lungs, pancreas, liver, and gastrointestinal system. Patients with cystic fibrosis produce abnormally viscous mucus, including in the upper airways and sinuses. The likelihood of nasal polyps occurring alongside coexisting cystic fibrosis appears to be dependent on increasing age, with the prevalence ranging from 6%-48% in adolescence.

Diagnosis of nasal polyps is performed by an ENT specialist, typically by looking up your nose with an instrument called a nasoscope or nasal endoscope, a thin tube with an attached light and camera. In some cases, you may need a CT scan to search those deep, dark recesses of your nose and sinuses that the nasoscope can’t reach. In addition to hunting down hidden polyps, a CT scan can also help the doctor visualize any other structural abnormalities or growths that may need further investigation.

As nasal polyps themselves are not considered a disease but typically a by-product of an underlying condition such as cystic fibrosis or allergy, it’s also important to conduct appropriate testing to identify any associated conditions, such as the sweat test for cystic fibrosis or an allergy skin prick test. Determining the underlying associations of your nasal polyps will guide appropriate management and treatment.

First-line treatment for nasal polyps is usually in the form of medications that aim to reduce the inflammation of the nasal passages. This typically starts with a corticosteroid nasal spray but may need to be escalated to steroid tablets or injections if the nasal spray is insufficient. Treatment with corticosteroid medications can often help to reduce the size of nasal polyps and their symptoms. Alongside medications that directly aim to treat the polyps, you may also be given other management strategies to address any conditions that are contributing to their development, such as antihistamines for hay fever or antifungal medications to treat fungal sinusitis.

If medications fail or are unlikely to succeed in the first place, such as with very large polyps, your ENT doctor may recommend an outpatient surgical procedure called a polypectomy. This is typically performed through the nostril rather than needing to make an external incision through the face, and aims to surgically cut and remove the polyps. At the same time, the surgeon may make some other surgical corrections to remove other obstructions or structural issues that are contributing to the development of the polyps.